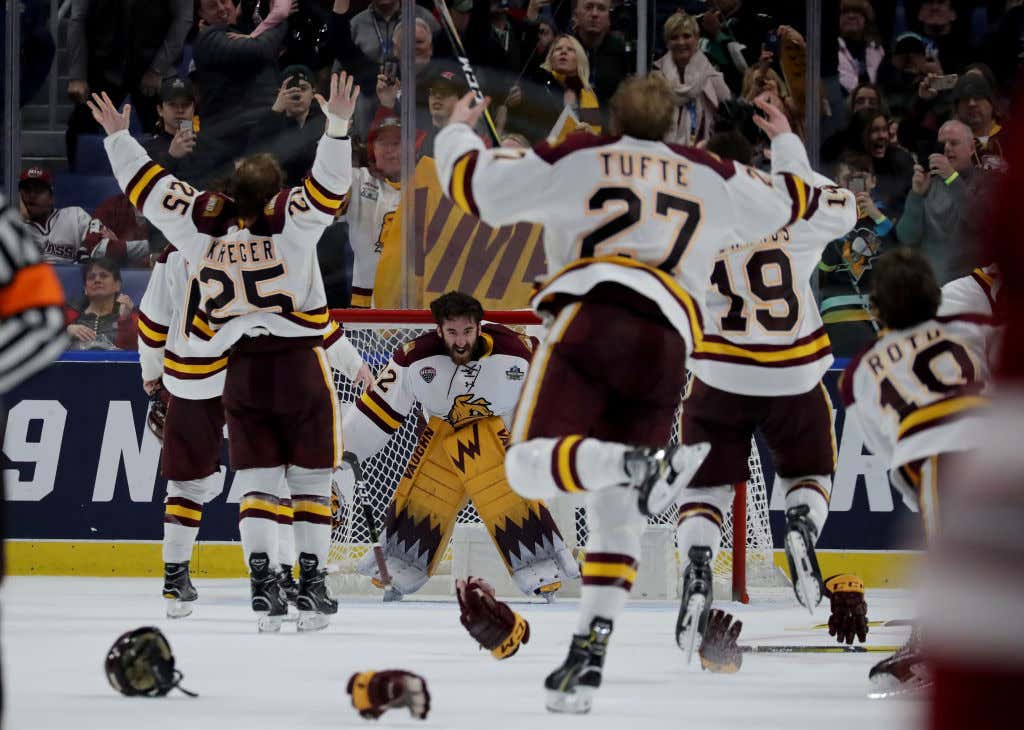 Like anything going on in the world there’s a lot of uncertainty in the hockey world in North America. The NHL is still slating for a January 1st slot but after listening to Bill Daly’s interview with NHL Rink it is all a work in progress and the league isn’t looking to rush any decision anytime soon so it seems like that New Year’s start although would be a breath of fresh air into 2021, doesn’t look possible but never say never. The AHL start date as of their latest talk seems to be February 5th and ECHL commissioner Ryan Crelin has confirmed a December 11th start to the season under a split-season format. When can we watch hockey again on our television? When can we watch hockey live again in person? Those are the questions no one knows the answer to right now. What we do know, is on the brightside is that NCAA hockey has made it’s official return this weekend and anybody missing hockey should be very excited about it.

College Hockey in my opinion has always been a backseat passenger to the NHL. When you look at other college sports such as basketball or football they are much more competitive with their sports in college than hockey. Plus sometimes you can make the argument that NCAAB or NCAAF can be more popular than the professional leagues and no...obviously the NBA and NFL are much more popular but you know what I mean. My point being is that College Hockey doesn’t have the coverage that NCCAB with March Madness or every Saturday you can find everyone watching a college football game on their TV with the tons of coverage that NCAAF gets. Maybe that’s because it’s tough to find on TV OR BECAUSE half of the good players are playing Junior in Canada or in some selected professional leagues overseas in Europe. I’m very lucky to have Youtube TV and the amount of sports channels that are included are absolutely incredible and I was quite surprised. The problem is every Saturday just like I just mentioned are those networks such as BTN, BTN+, Fox Sports, ESPN, NBCSN and NBCSN+ are flooded with football games but a lot of those games can be found on their own streaming networks. It’s so nice because you just log in with whatever TV provider you’ve got and bam you can stream any game live that day. Likely Wisconsin @ Notre Dame was on NBCSN, Arizona State @ Michigan was on the BTN for Friday, Saturday and Sunday.

With that being said, for the first time NCAA Hockey has an opportunity to be the main focus of the hockey world. I couldn’t be more excited for the season to start. The excitement around the NCAA is palpable, even if this will be a bittersweet campaign: at least seven programs have already bowed out of playing the 2020-21 season due to the pandemic. The Ivy schools (Harvard, Yale, Cornell, Brown, Dartmouth and Princeton) and RIT will all take a pass on competing and that is truly unfortunate, but also understandable.With that though I think you’re going to see some craziness from start to finish this hockey season. With COVID-19, some conferences playing in bubble type like atmosphere’s for example, The NCHC which has scheduled 26 league games, split into two parts, with the first part starting Dec. 1 with all teams playing in a centralized location, Baxter Arena in Omaha, Neb. Each team will play 10 games while in Omaha over a three-week span before Christmas. After the holidays, when students will be returning to their campuses, the schedule will go back to "normal" with each team playing an additional 16 games with no non-league games.

Also, Atlantic Hockey has announced that the 2020-21 season will officially begin the weekend of November 13-14, 2020. The schedule features 24 games and allows for up to 28 games for all AHA teams. The season concludes with the Atlantic Hockey tournament, which will include all 11 teams and be played over three weekends culminating with a return to Buffalo’s LECOM HarborCenter. Very blessed that Pegula’s built that facility.

It’s going to be insane not only to keep track of everything that is going on but it’s nice to have hockey back again. So thank you hockey god’s for bringing NCAA hockey to watch on the weekend.

The Big Ten returned on Friday night but I’m very excited to watch the Hockey East who begin their schedule and play this weekend.

I like how they added the flex weekends but I don't really understand why the games played on the flex weekends won't count towards the standings. What is the point of even playing them really if you aren't even going to count them? Obviously it counts for the NCAA Tournament, but I just don't understand why they wouldn't count for Hockey East. Fans or no fans in the buildings this is great for New Englanders and hockey fans in the north east. I’m very stoked to watch UMass Lowell and Boston College. BC will once again be one of the best team in the country this season.

Back to Sports Blog